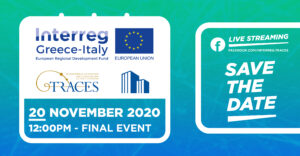 Friday 20th  November 2020 h. 12 p.m. the Conference: “TRACES Final Event” will be broadcast by Facebook. During the Final Event will be announced the results achieved by Traces project – TRansnational Accelerator for a Cultural and Creative EcoSystem, funded by the Interreg VA Greece-Italy 2014-2020 territorial cooperation programme and its follow up.

The project, aiming to promote creative entrepreneurship and the growth of cultural and creative industries as engines of an inclusive and sustainable local development in Apulia and Western Greece, has promoted a series of actions aimed at supporting cultural and creative start-ups within their own territories.

TRACES has made a mapping of the needs of young creatives and start uppers in Apulia and Greece, activated a territorial network of incubation places and innovation centres, the so-called Local Ateliers, in which an experimental incubation and acceleration program “tailored” on specific and differentiated needs that emerged, it created a cross-border accelerator dedicated to CCIs and created the first edition of the Transnational Creativity Trade Fair, the first digital fair dedicated to professionals of culture and creativity.

The conference will be attended by: